The « first edition » of the 'Caravane FM' (radioprogramme) at the CRR

Discover the new programme broadcasted by the the RTS, Caravane FM, Wednesday the 11th of October 2017, at 20h10 on RTS1. 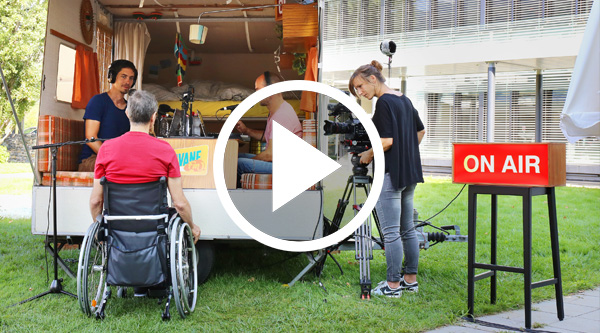 The CRR is honoured to host this great  « first edition ». The programme combines a local radio station broadcast with a TV documentary. The presenters Lionel Frésard and Jean-François Michelet travel throughout the French speaking part of Switzerland in their mini van towing their caravan behind them. When they arrive at their destination, they unfold their caravan and set up a radio aerial.

For three days, patients and their friends and family join the two presenters to tell their story over the  « Caravane FM »'s microphone. They can also dedicate songs and of course their emotions. During this time, several cameras catch this rather touching exchange of experiences and emotion on film. Caravane FM has a moto;  humanity and simplicity. The radio strives to create a connection between the residents of each place it visits, to privilege a moment of sharing between the presenters and the residents. The goal : to draw up a portrait of the institution, through the residents' eyes, in the case of the CRR, its patients.

Episode 1 : Within the walls of the CRR

See all the episodes

To be seen on the site of the RTS

Become a volunterr at the CRR